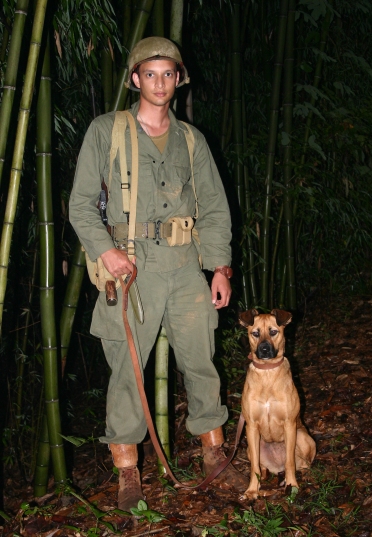 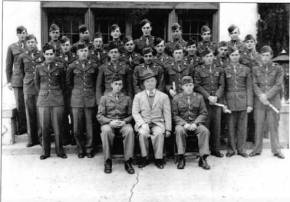 Graduation photo of the 26th QMC War Dog Platoon. The civilian in the front row is their German dog trainer.

Receiving Orders for a Patrol

Preparing Teddy to Deliver a Message

The 26th QMC War Dog Platoon, under the oversight of the Remount division of the Quartermaster Corps, was formed at Camp San Carlos at the California War Dog Training Center.  There handlers trained with dogs for 8 months for combat operations.  Most of these dogs were destined to be scout dogs (work at the front of patrols to detect human presence from a distance) or messenger dogs (work at the back of a patrol to carry messages between a handler with the patrol and another handler at the nearest command post).  Their main instructor was a German civilian.  On May 14, 1944 the platoon boarded a Liberty ship and were aboard for 31 days.
-William Garbo, 26th QMC WDP veteran

The second QMC platoon to enter into the Pacific campaign was the 26th, arriving in New Guinea on June 16, 1944, under the command of 1st Lt. James Head.  Two weeks later the platoon accompanied the 41st Division to Biak Island, just north of New Guinea, and shortly thereafter moved on to Aitape with the 31st and 32nd divisions.  During the Aitape operation, the platoon, minus one squad, worked both scout and messenger dogs.  Handlers had a hard time in the heavy jungle growth, since they were working the dogs on leash, and the messenger dogs were found to be ineffective when required to run considerable distances through heavy mud.  Still, the platoon boasted several good alerts to ambushes, and the messengers made quick runs from patrols to command posts.
-From War Dogs: A History of Loyalty and Heroism by Michael G. Lemish (Brassey’s, 1996)

After New Guinea, the platoon would move on to the Netherlands East Indies.  During operations there they would conduct 250 patrols between 17 September and 2 November, 1944.  Not a single patrol was ambushed and the scout dogs alerted to enemy presence at no less than 70 yards and up to 200.  It is estimated that 75% of all enemy killed were taken by surprise.  The environment wreaked havoc on radio equipment and messenger dogs were often used instead.  One particular dog made 3 trips to the CP and back to the patrol covering 9,000 yards.
-Taken from War Dogs: A History of Loyalty and Heroism

The 26th QMC War Dog Platoon messenger dog handler impression for New Guinea, summer 1944, involves two gear setups: full gear and on a combat patrol.  The main difference is that the troopers would leave behind the M1943 jungle pack and helmet.  Mr. Garbo explained why they went to the standard HBT caps for patrols: “The use of steel helmets in the dense jungle was not a good idea if you wanted to remain silent. This choice was up to the patrol. When there was no worry of  trying to remain silent while making your way through dense brush we wore the steel helmet. Night patrols were always with cloth fatigue caps.”

Here are a few more notes about the impression taken from a conversation with Bill Garbo, occasionally followed up via email.